Today, the decision has been taken to give the Pollux’NZ City project a second breath: it is being published as opensource and libre. We are really thrilled to share the project’s technologies we have developped over the last two years, with my friend and colleague Kasey at CKAB.

At first, it began as a simple implementation based on Adafruit’s sensor shield, as a Proof of Concept. We could show off the fact that it is possible to create a simple arduino-based solution that interact with the environment. But that was far from being a correct solution for autonomous measurement. It used a 6 battery pack, couldn’t go into sleep mode between measures and the sensors weren’t reliable enough. 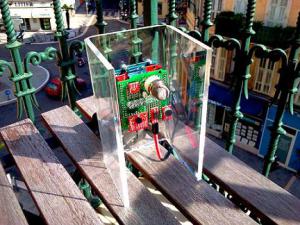 So we decided to go for a design from scratch. We designed the overall architecture so we can create a cluster of autonomous sensors modules that are interrogated by a gateway module that pushes the values over Internet on datastores.

And for more flexibility, we decided to make each measuring module independant, operated by a simple microcontroller working on a bus.

Finally, on the Gateway module, we decided that it should be agnostic of any datastores, so it could push on any platform that exists, or will exist.

Then, begun the new implementation. To be able to work with clusters of modules, we chose the zigbee technology, that can create secure and reliable communications between nodes, and can create mesh networks. We used the XBee modules for their ease of use and position on the market.

For the autonomous sensor module prototype, we implemented an Arduino with a XBee shield, and master of an I2C bus. On that I2C bus, all sensors are implemented with a microcontroller (an ATTiny85) that controls each sensor and format the returned values for transfer over the I2C bus and XBee radio. 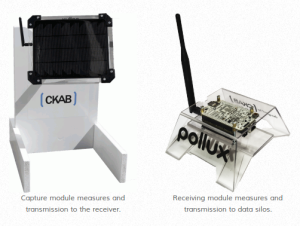 The gateway is actually the brain of the whole system. It knows every autonomous module on the network, and every measuring sensor on each of them. On a regular basis (about 15min interval) it will query each sensor of each module, and push them to configured datastores. That’s why we implemented a web UI frontend on the beaglebone that enables the users to configure the topology of their network and configure the datastores addon.

Basically, a datastore addon is a simple python script that gets a list of all the values measured, so it can format them (in JSON, XML, CSV…) and send them to the chosen web service.

Today, the project is being on field testing with the help of the INRIA laboratory, and we hope it will give a frame for future designs of pollution sensors. 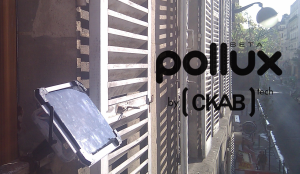 And today our project has been featured on hackaday!