The Open Light Project: Next Step

The goal of that project is to create cheap and efficient wireless devices to control professional lightning products, traditional analogical ones using a controlled Triac and DMX ones, by using a transceiver to DMX.

For the wireless part, the best option is using the zigbee, which is light, cheap, yet meshable.

The first step, here, is to test the designs exposed, then prototype it using the DIP designs showed in images here, and finally rebuild it using SMD components only. Once I’m sure things I’ve done works, It’ll be published.

First step, let’s put a MAX485 and control a LED projector from an Arduino. To work it out, I wired up a MAX485” on a breadboard.

To talk to the board, I found out the DMXSimple project from tinker.it, which is pretty neat because the protocol has been implemented close to the assembly, and run by a timer so you won’t get timing issues.

But sadly, my first attempt has been unsuccessful…

For the time being, here is a first look at a possible implementation of the DMX to zigbee board. The overall cost of this design is about 30 euros without connectors and casing.

And now, let’s have a look at the Triac schematic. I finally found out a really neat cheap and efficient design of a Triac on the Intertubes.

But I changed a few things from this design, first of all I want to change the old ATTiny2313 to the better ATTiny85 to control the triacs, and change the very (too?) simple alimentation to a more usual one.

Here is a first design attempt I built 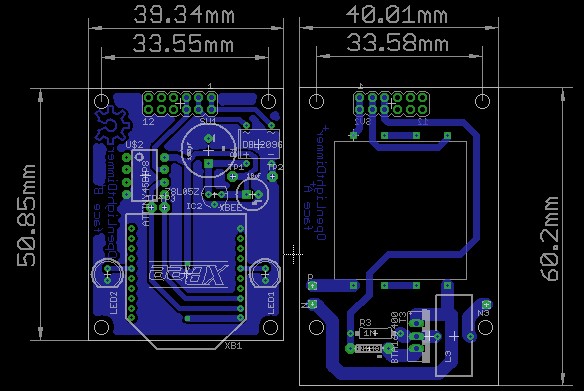 And here is the first prototype. Once it’s built, I’ll write a code to test it. 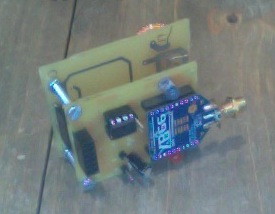 I just found out about the XBee SMT, which is as cheap as €14.40, wih a µFL connector. I have worked on a footprint for eagle, and I found out the written package specification are inconsistent:

Thus, I used the given DXF file and imported it in eagle, but I have yet to verify it against the real chip once I’ll buy one. 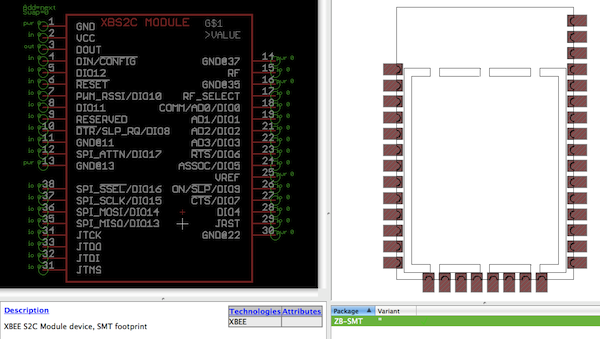 I’m going to put my own Eagle library on my github soon, including that package.