A migration story: from blogofile to hugo

It’s been a long time since I last posted on that blog. Besides the fact that I’ve been too busy to update it, it’s also because it was stuck in 2009.

When I first heard of the concept of static site generator I was very excited, so I used the first tool that existed — Blogofile. I hacked together a site, made nice looking URL (on the nothing.to/do scheme 😉) , and made my site xhtml 1.0 compliant (as was the hype at the time), and integrated my existing dotclear theme into blogofile’s templates. 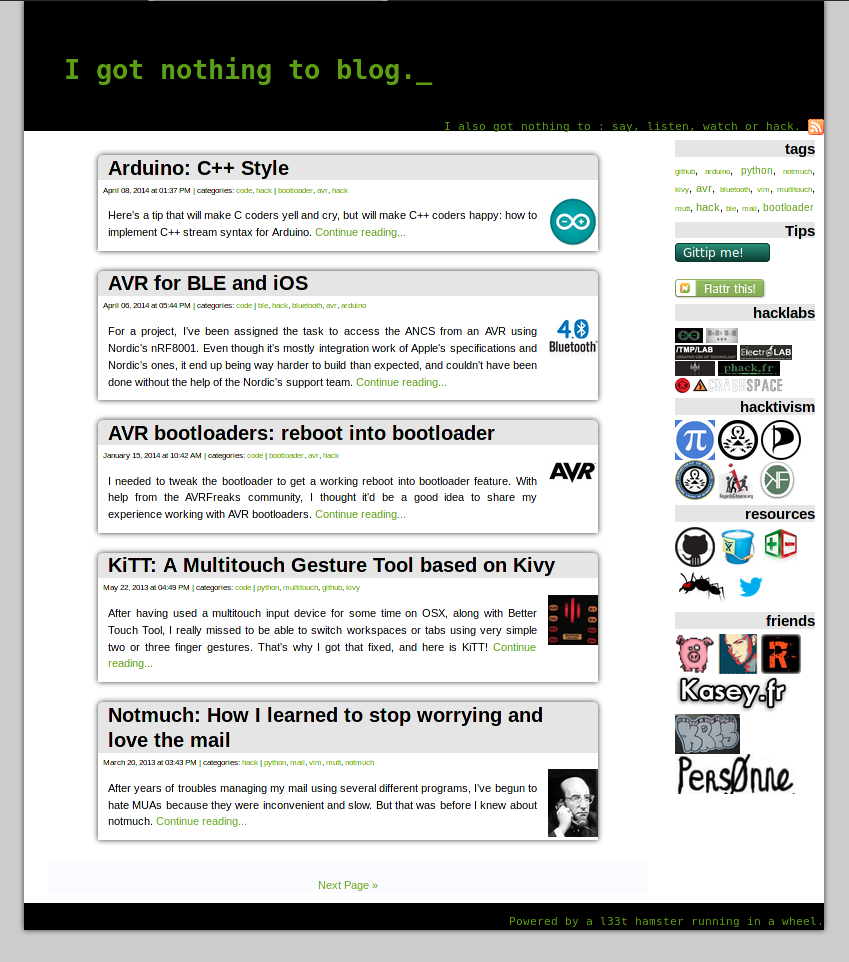 But since 2009, a lot of things changed. HTML5/CSS3 has taken over the world, displays’ resolution got much better and the kind and screen size of devices on which you look at a website became a lot more diversified. The adaptive design looks were’nt fit anymore… So what was then a comfortable and easy to read blog, became an unreadable ugly website in just a few years. Thus an upgrade of the look’n feel was needed.

Then another issue appeared, since I developed the first version of my blog, I kept it up to date with blogofile with ease. But many parts of blogofile broke between v0.7 and v0.8, meaning that upgrading the engine would mean a major rewrite of the code. That made me consider engine alternatives…

Not long before I decided to revamp my blog, my friend Dimitri told me how happy he was using Hugo. I also considered other options, from Pelican to Jekyll. What eventually drove me towards Hugo has been that it featured a hundred of modern-looking themes, and that I was curious about discovering The Go language, on which I had good feedback.

And there I was, following the quickstart to compile and install the tool, browsed through the hundred themes to find the one that met the minimal requirements I had — non-compiled CSS, responsive design, focused on reading comfort, and with a hack friendly license. So, the one I found matching most of those criterias was minimalist’s theme from @rriegger as adapted to Hugo by @digitalcraftsman. 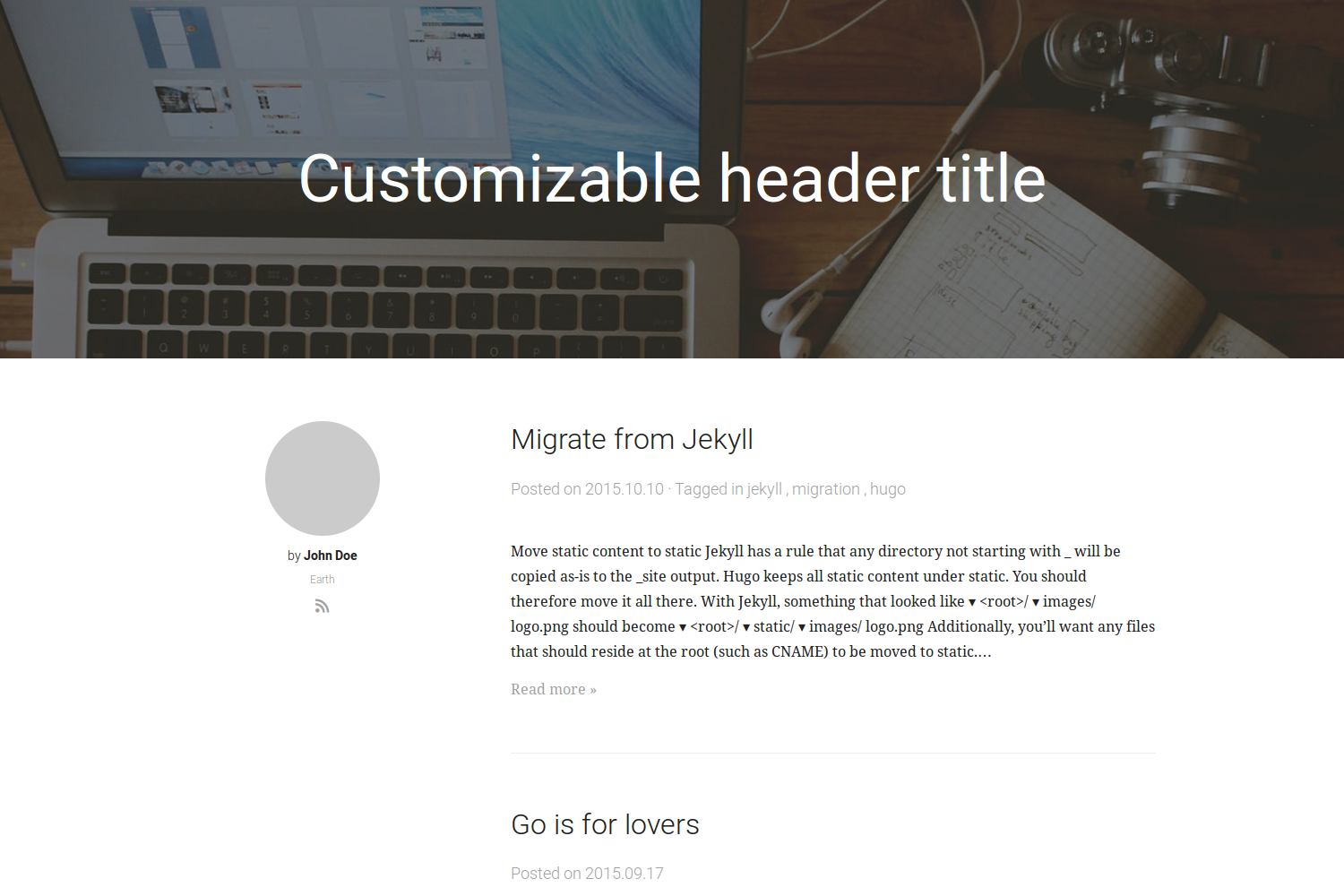 And there the fun begun. I took all my old markdown files and moved them in the content folder. I’ve patched them to add the aliases parameter, so I could make sure I wouldn’t break the web, switched from the odd old $$code format for codes, to have proper original markdown support (I would still need to choose an highlighting strategy at some point), and that was done.

Then I went on to hack the theme to make the site header smaller, remove the “about” part on the left of the articles — this blog really is about my hacks — and moved the social-stuff icons to the top right, so they’re there but not in the way. Doing so, I had some fun implementing the blinking cursor (because <blink> forever!) and give it the same look my old Amstrad CPC6128 had. 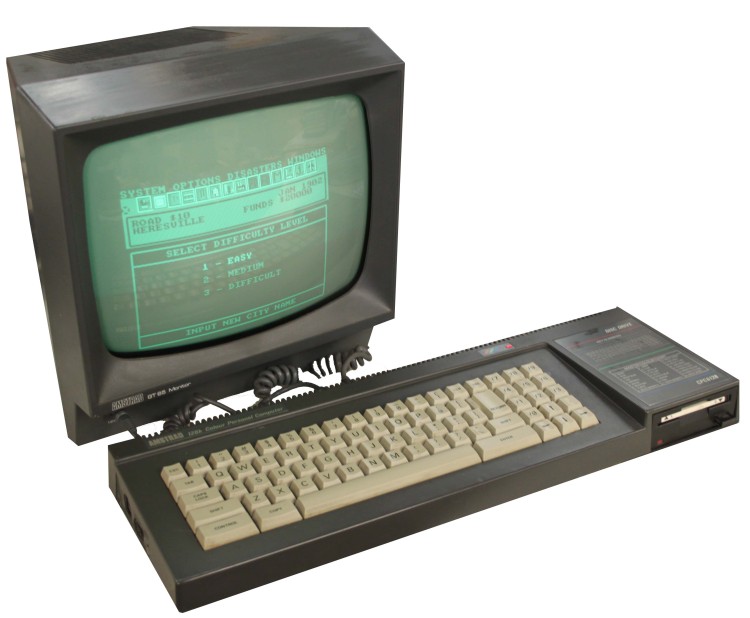 So after some google search, I found a neat tip to make neon glow, that once a bit reduced would make a perfect case for CRT glow. Then I made the background having some green halo, to feel like the old bubbly CRT of the Amstrad, using a radial gradient as background property of the header.

I also wanted to give the same texture that old CRT had, so I borrowed from that demo the pixel lines overlay (but skipped on the flicker and on/off effects… as it’d be a bit too much ☺). As sophisticated that demo looked, actually all I needed was to add:

To make it complete, I found:

on Fonts2u drawn by Wesley Clarke, who I thank as he made it free to use.

I finally hacked together the tag cloud, using a CSS hack, added the path within the blog within the navigation partial. And I was almost done…

I finally solved that issue by adding a blog section, and a single post that will get ignored, and which will list all data. Then, I made the index page a redirect to the /blog path. And it was almost done!

I’ve also added a neat feature that enables you to edit the articles on both github or gitlab, by clicking on the logos on top or bottom of the page ! And when I do tweet about an article, you’ll be able to reply to that tweet by clicking the link below !

To make my setup complete, I had to be able to publish with a simple git push and I had that possible thanks to gitlab and the external CI runners! I only had to add the .gitlab-ci.yml which contains the hugo -d ~/www/nothing.to command to deploy the site, ran as www-data! 👌

So now, I’m happily blogging again, thanks to that blog propelled by the hamster in a wheel!